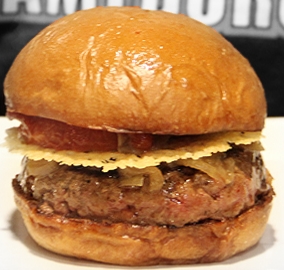 Well GQ has officially named the Umami Burger as burger of the year and that got the burger lovers of the world going crazy on various sites, especially Shine by Yahoo which syndicated the Burger of the Year claim earlier this month on their blog. Â Claiming that they don’t usually name a burger of the year but that the Umami burger is no ordinary burger, the review of the sensational burger experience of Mr. Alan Richman (the most decorated food writer in history!!) is a fun to read and makes me want to at least try a Umami Burger BUT is it really the best burger in America?

That’s the most asked question of any burger connoisseur and to say that a burger chain in California with four locations is the best burger anywhere may be a bit of a stretch. Â Mr. Richman obviously has a gift for writing food reviews (he’s won a lot of awards) but one paragraph in the review made me think that perhaps there’s a need to try more “gourmet burger” places before proclaiming burger of the year for Umami.

“Fleischman, the founder of the modest but ever expanding four-shop Umami Burger chain, has rethought every element of the hamburger experience. The bun. The meat. The ketchup. The toppings. Even valet parking. Yes, at the original Umami Burger joint on La Brea, 900 square feet of utter simplicity across the road from a Goodwill store, every burger comes with parking, the ultimate in West Coast customer service.”

Doesn’t every burger maker with less than 5 locations claim to have redone the burger as we know it. Â The bun. Â The meat. The ketchup. The toppings. Â That’s why I love burgers, because everybody rethinks the burger. Â The comments on Yahoo are lighting up with the typical In-n-Out fan club rantings and the occasional Five Guys plug but the consensus seems to be that Umami, although amazing and probably deliciously intriguing probably isn’t worthy of Burger of the Year just yet. Â It seems to be an issue of consistency. Â Five Guys is the same burger every time. Â In-n-Out is the same burger every time and the freshness is always there. Â Communal (in Provo, Utah) has an amazing burger that may be as worthy as Umami for a burger of the year claim BUT that just won’t go over well with the masses.

So what’s the solution? Â Is the Umami Burger the Burger of the Year? Â Sure, but it’s only Alan Richman’s opinion and as long as he’s winning awards and writing for GQ then the rest of us will just have to clap for Umami and their Burger of the Year….and make a note to try it next time you’re in L.A.:)

1 Comment on Umami Burger Madness – Burger of the Year?