There’s a new burger restaurant in South Jordan called Buster Burger and it is home to the Single Buster, Double Buster and the mighty Triple Buster. Â As this was my first trip to Buster Burger it only felt right to get started with the massive Triple Buster which is, as you can imagine, a triple burger with cheese and all the toppings one man can handle. Â First off, Buster Burger has nailed it with their choice of bun. Â The bun was delicious and was not only delicious by itself but held together for an entire Triple Buster meal…great job! Â I also added pineapple which is an extra .79 but well worth it and some bacon (.69) but the bacon ended up being forgotten, which is ok for this burger because everything else worked nicely. Â I also added some very tasty grilled mushrooms which went nicely with the cheese, lettuce, tomatoes and pickles. Â  My Triple Buster was complete and now let’s talk taste.

The Triple Buster is a darn good burger. The meat and all the ingredients worked very well together and the taste of freshness was the overwhelming consensus of the taste buds on bite one. Â Best described as heartier and meatier than In-n-Out but not as overwhelming as Five Guys. Â Overall the Triple Buster held together throughout the meal and although it didn’t scream out “one of a kind”, it’s a good burger that anyone would enjoy. 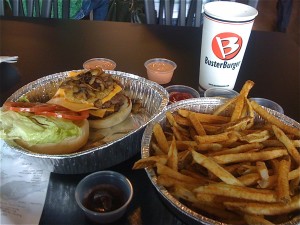 ow for the french fries. Â Finally a burger place that realizes french fries are just as important as the burger. Â When your Buster Burger meal is presented to you as two large metal tins, one with a burger and one with fries, that is a moment you’ll remember for a while. Â I believe my french fry loving self was in fry heaven when I realized they were all for me. Â The fries are very similar to a Five Guys style fries with a little skin left on the handcut fries and a great combination of crispy and soft. Â The fry sauce is not a secret recipe or anything but it’s delicious and the assortment of sauces for your fries or burgers helps make Buster Burger a great choice for anyone that loves a burger.

At lunch time on a Friday the wait was minimal and the fact that there is a TCBY inside of Buster Burger means you can even have a healthy frozen yogurt dessert after eating a tin full of fries and a triple patty Tripple Buster. Â The total price for the Triple Buster (with pineapple and bacon), large fries and a drink was just under $14 but I walked away satisfied and can recommend Buster Burger’s Triple Buster for anyone looking for a new burger.