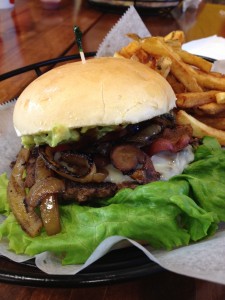 Sammy’s has been a Provo hotspot for a while with music, fun and pie shakes but they’ve recently added locations in Salt Lake City, Rexburg, Idaho and at the golf course in Cedar Hills. I’ve had some Sammy’s meals in Provo but it was time to experience one of these newer locations to see if the magic can be replicated. As we got closer to the Cedar Hills golf course it was a welcoming sign to see the Sammy’s van out front, we were getting close. The restaurant is beautiful and open with plenty of seating a just enough Sammy’s personality to feel right. Today’s experience was the Sammy’s Masterpiece.

The Sammy’s Masterpiece is a 1/3 pound burger with provolone cheese, sauteed onions and mushrooms, bacon, gaucamole, bbq sauce, lettuce and tomato between a lightly toasted Sammy’s bun. The first note is that this is only a 1/3 pound patty, not a lot of meat here but Sammy’s is probably best described as a place where the toppings make your burger different, not the meat. 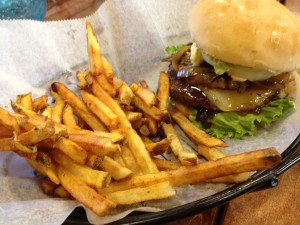 It was a good burger but not great. The meat was absolutely normal, the toppings were good and worked well together and the bun worked well with everything. I added a side of fries which, with a drink, turned my meal into $9.29 expense. For what I got it was a debatable value. As for their regular fries, they are served as fresh cut fries and taste pretty darn good. Sammy’s fry sauce has a smokey taste with the fry sauce tang which means it’s a tasty addition to the fries and your burger. Sammy’s also offers some pretty good sweet potato fries.

But let’s be honest, Sammy’s Cafe isn’t especially known for their burgers although the toppings would suggest otherwise, Sammy’s Cafe is the official home of the Pie Shake. The Real Pie Shake offers a wide selection of delicious pie additions to a powerfully yummy shake. They also have cupcake shakes and malts so even if you go somewhere else for dinner, the pie shakes are pretty darned good! The Cedar Hills location is nice, clean and bigger than the Provo original but it is missing some classic history that only the Provo location can offer. Overall it was an average burger with a great pie shake for dessert. 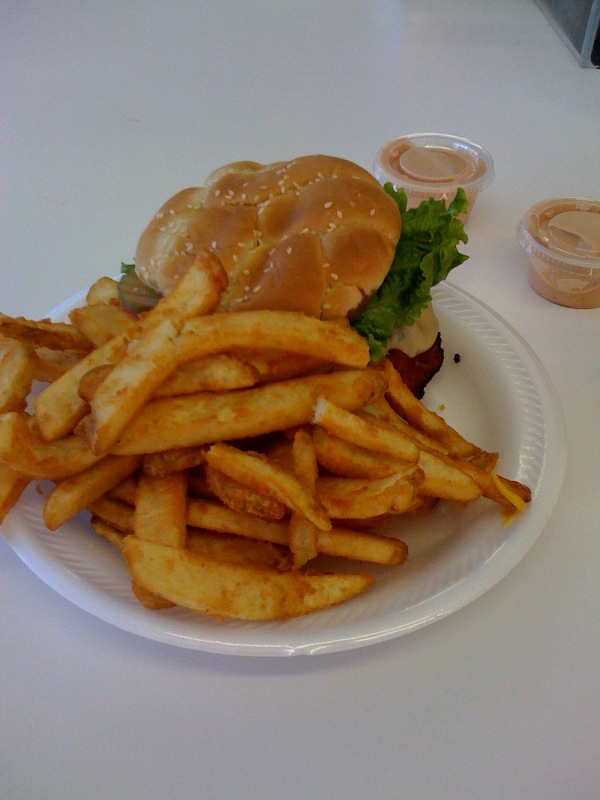