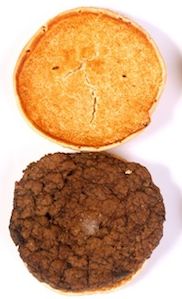 So you’ve probably heard of the lady that saved a McDonalds burger on a shelf and after 12 years it still looked the exact same with no mold, no fuzz, no nothing.Â  In fact, if you’ve seen the pictures the burger looks just as good as it does fresh and then she goes on to say how Americans are feeding their children this stuff and we are all going to die (perhaps not using those exact words but you get the point).Â  Hurray for science because the folks at the Burger Lab have conducted an official experiment and this update is amazing.

“I decided to design a series of tests in order to ascertain the likeliness of each one of these separate scenarios (with the exception of the no-air theory, which frankly, doesn’t hold windâ€”get it?). Here’s what I had in mind:

What’s great about this is the factual science behind mold is shared, the idea that beef jerky is made in a similar manner to how the McDonald’s burger was aged is mentioned and the fact that the people doing the experiment weren’t already food nazis all helped to make me even prouder to be a burger eating man.Â  In fact, I think we’ll have McDonalds for dinner….just because we can.