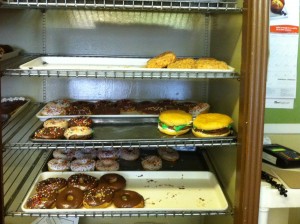 I went to the Lehi Bakery today (on historic Lehi Main Street) and was glistened with the scents of amazing donut masterpieces as I opened the front door. Â As I gazed at the wall of donut trays and the beauty that was baked pastry goodness I was startled to see a burger staring back at me. Â Two burgers to be precise. Â They looked out of place but attractive next to the square glazed, the coconut donut and the maple bars but I knew that as a connoisseur of burgers it was my job to buy, eat and then review the Lehi Baker Donut Burger.

The bun is a unglazed baked donut with no hole. Â The inside patty is actually a chocolate raised donut and the dressings include a whipped cream, icing for lettuce and mustard and a raspberry fill for the ketchup look. Â I’m not a rookie to the sweet looking bad tasting pastry world so I was cautiously optimistic about the Lehi Baker donut burger but even the bakery worker said she’s heard good things about it, while not actually tasting it herself. Â For $2.09 I was willing to give it a try, and give it a try I did. Â DELICIOUS! 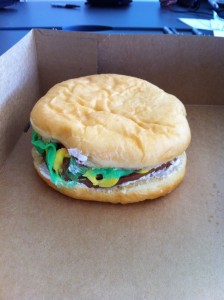 It was in all honesty a donut burger to beat all donut burgers. Â I can’t talk to the amount of calories, fat and other potentially life threatening aspects of the donut burger but I can talk to the fact that it was delicious. Â The fusion of donuts and whipped cream and a hint of raspberry filling was a beautiful medley of deliciousness that made me smile, contemplate and devour the donut burger. Â Was it worth $2.09? Â YES. Â Should I have also purchased a maple bar? Â NO, but I did and that’s beside the point. Â Overall it is safe to say that if you are willing to give it a try you won’t be disappointed by the Lehi Baker Donut Burger.