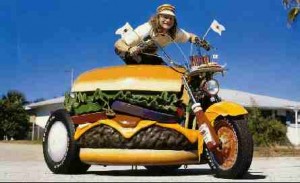 id you know that Florida is not only home to Disney World and beaches but also the International Hamburger Hall of Fame?Â  Located in Daytona Beach, Florida, The International Hamburger Hall of Fame was founded by Harry Sperl, a German immigrant that fell in love with hamburgers for the American icon that they are.Â  Things got really crazy when Harry combined his collection and love of hamburger “stuff” with his other great passion, motorcycles.Â  And thus was born the world famous Hamburger Harley (this is real stuff).

Spending more than $60,000, Hamburger Harry, as he is affectionately referred to by his fans, finished his dream of a burger motorcycle after a lot of work and dedication.Â  He owns more than 500 hamburger artifacts including a hamburger waterbed, hamburger displays from restaurants around the country.Â  Yes he is married and yes his wife supports and encourages him:)

I thought BurgerVoice was a devotion to burgers but a motorcycle and an International Hall of Fame all devoted to burgers makes me feel like I’m missing something in my life.Â  If you are in the Daytona Beach area and have a chance to either see the Hamburger Harley or the Hall of Fame, please let us know.Â  Thanks Harry!