Within 5 minutes I was handed my order (order #77 if anyone cares) and was excited to see another oversized Six Dollar Burger waiting to be unwrapped.Â  As you can see from the picture, this was a good looking burger.Â  Still not exactly the same as in the ads but pretty close and I will say this, I’ve yet to be disappointed by how any of the Six Dollar Burgers look.Â  The Teriyaki burger was fresh, the grilled pineapple was juicy and the teriyaki sauce was a nice combination of sweet and tangy, all of which complimented the lettuce, onions, beef and overall burger very nicely.Â  I’m usually a fan of Hawaiian burgers and have eaten my fair share, and the Carl’s Jr. Teriyaki burger is as good as any Hawaiian style burger I’ve had.Â  Compliments to the folks at Carl’s Jr. for making another quality burger.

I can confidently recommend the Teriyaki burger to anyone that likes the pineapple surprise and the sweet and tangy goodness of teriyaki sauce on a burger.Â  It really was as good as any other I’ve had.Â  For the record, I also had a Big Hamburger on this trip and it wasn’t so good.Â  Old, stale bun, cold etc. but at least I know that they don’t serve crap if you order of the Six Dollar menu:) 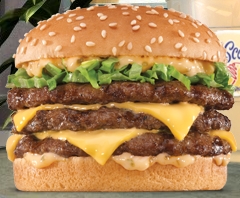